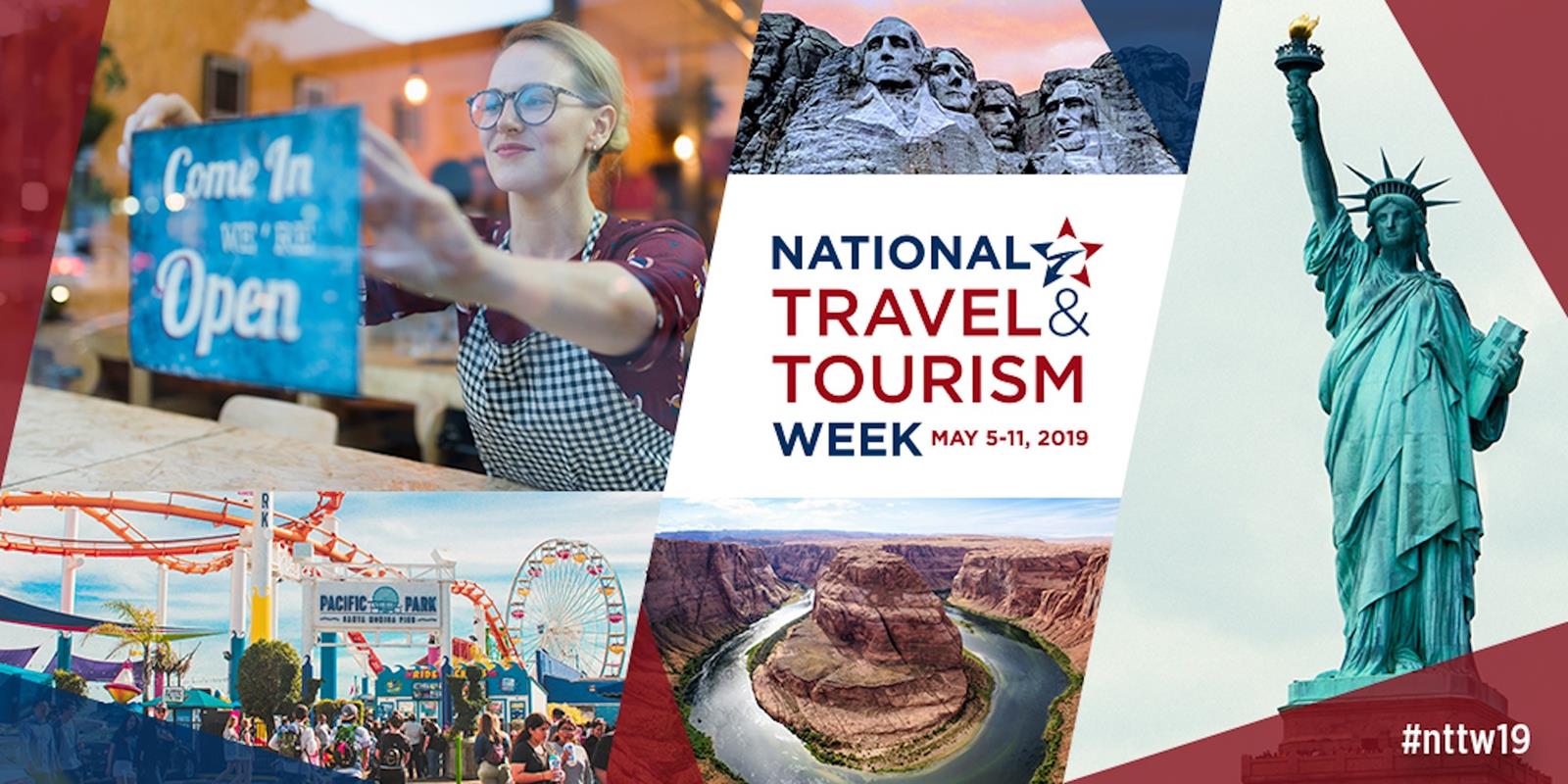 To celebrate this year’s National Travel and Tourism Week (May 5-11th), we’re taking a closer look at how tourism positively impacts both large-scale employment and small-town economies. How does tourism help your town?

There’s no denying that the increase of tourism in certain areas, especially when it’s unregulated, can negatively impact a town. We often forget, however, how many positives come with an influx of tourism. To honor National Travel and Tourism Week, we’re diving in to how tourism has helped natural areas and small towns become true economic forces, and survive even the worst financial downturns.

President Reagan established National Travel and Tourism Week in 1983 as an annual salute to travel in America. Now, communities and organizations use the first full week in May to celebrate travel’s contributions. This year, the travel industry is coming together to celebrate why “Travel Matters.” Each day, they’ll be highlighting a different way travel matters to American jobs, economic growth, and personal well-being.

In 2018, U.S. travelers spent $1.1 trillion dollars and supported 15.7 million jobs. That’s pretty incredible! According to the U.S. Travel Association, without the tax benefits from travel and tourism, each U.S. household would’ve had to pay $1,340 more in taxes last year! 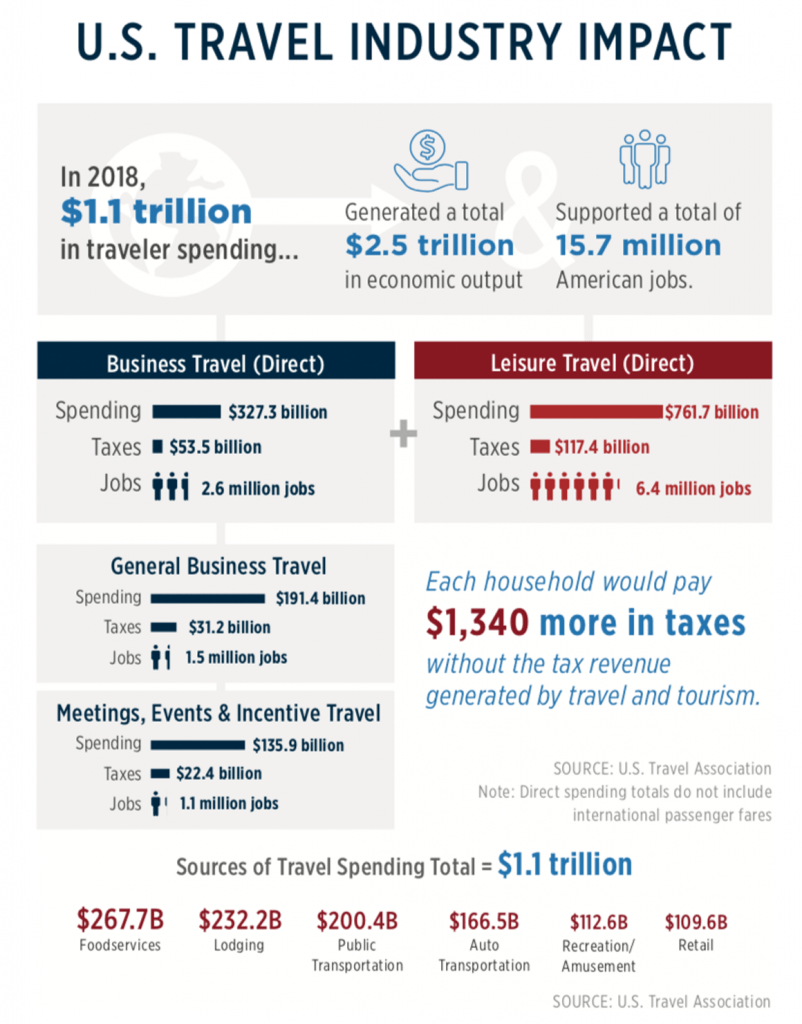 Graphic and data by the U.S. Travel Association

It’s hard to deny travel’s positive impacts on economic growth in this country. In addition, certain federal agencies related to tourism and travel provide crucial economic structure. The Bureau of Land Management, for instance, cares for huge tracts of land and provides free campsites across the United States. With an economic output of $88 billion last year, they are also one of the few federal agencies that generates more revenue than it spends. 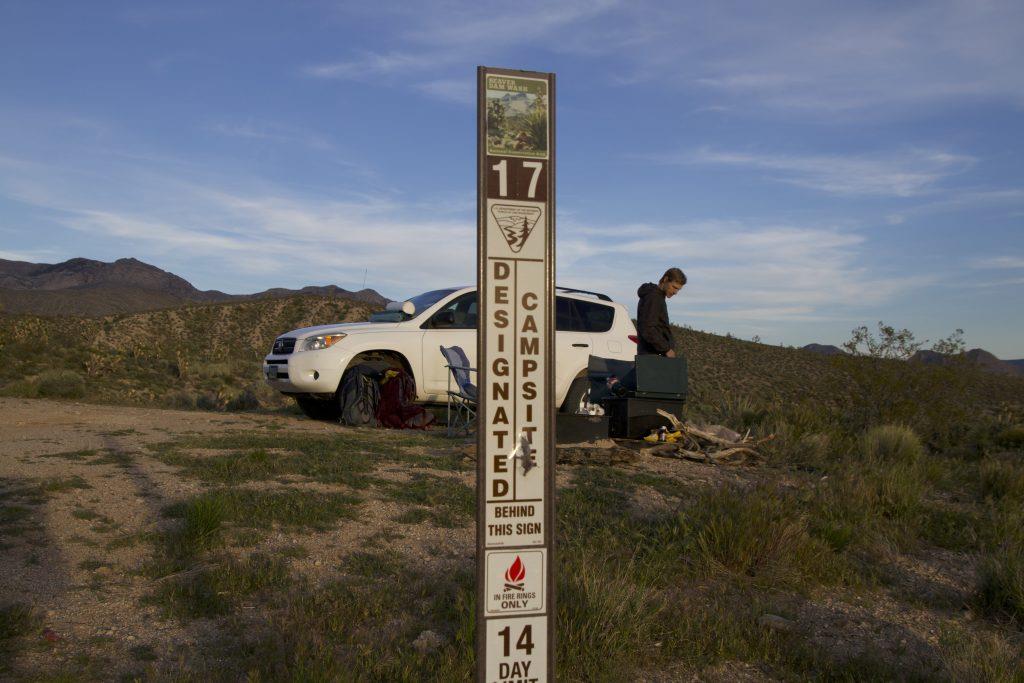 Hanging out at a BLM campsite near the Utah Hills

Those free campsites the BLM manages? They in turn provide access to lower-income demographics, providing a positive outdoor experience for some who may not have one otherwise. This positive cycle of travel and tourism is exactly what this year’s National Travel and Tourism week is highlighting day-by-day. From Sunday to Saturday, the NTTW is focusing on travel-related economy, new experiences, jobs, keeping America connected, health, hometown pride, and families. 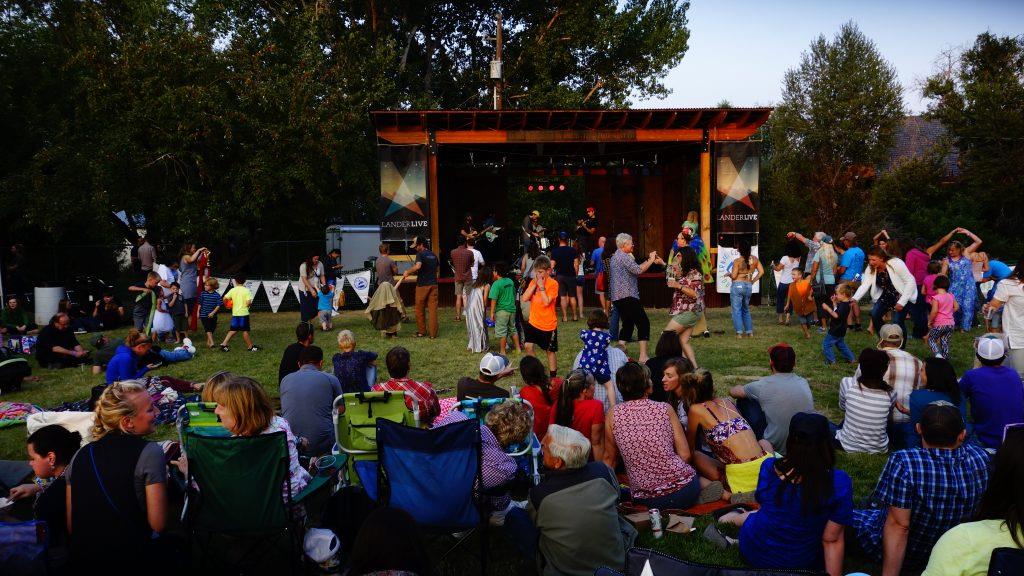 Locals dance during one of the free Lander Live summer concerts.

Despite the fact that you might not be able to get your favorite table during the busy season, tourism has a huge impact on the health of a city. For example, Visit USA Parks is based in Lander, Wyoming, a tiny western town that had a big iron-re and uranium boom in the 1950s and ’60s. That boom brought economic growth and stable jobs to the area. Since the closing and/or shrinking of several of those industries, Lander’s population has dwindled, and younger people started leaving for better opportunities. 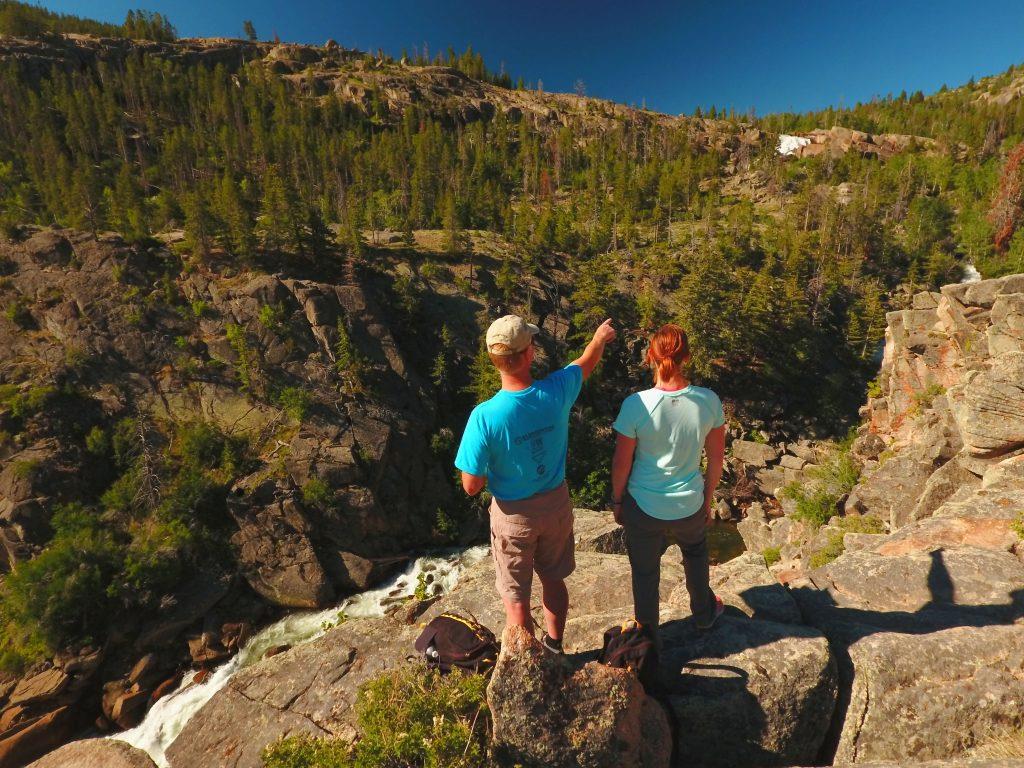 Hiking in Sinks Canyon, outside Lander.

Since then, NOLS, the National Outdoor Leadership School established their headquarters. The Wind River Range and its foothills attracted hikers and climbers from around the country. The Yellowstone corridor became less of a path and more of a destination in and of itself. The growing popularity of outdoor recreation like hiking, mountain biking, climbing, and fishing helped keep the area stable. Now, summer sees a slew of tourists passing through Lander, coming to climb at Wild Iris, or going to hike in the Winds. According to Dean Runyan Associates who conducted research on behalf of the Wyoming Office of Tourism, every county household paid $432 less in taxes this year, because of the taxes generated by travelers. 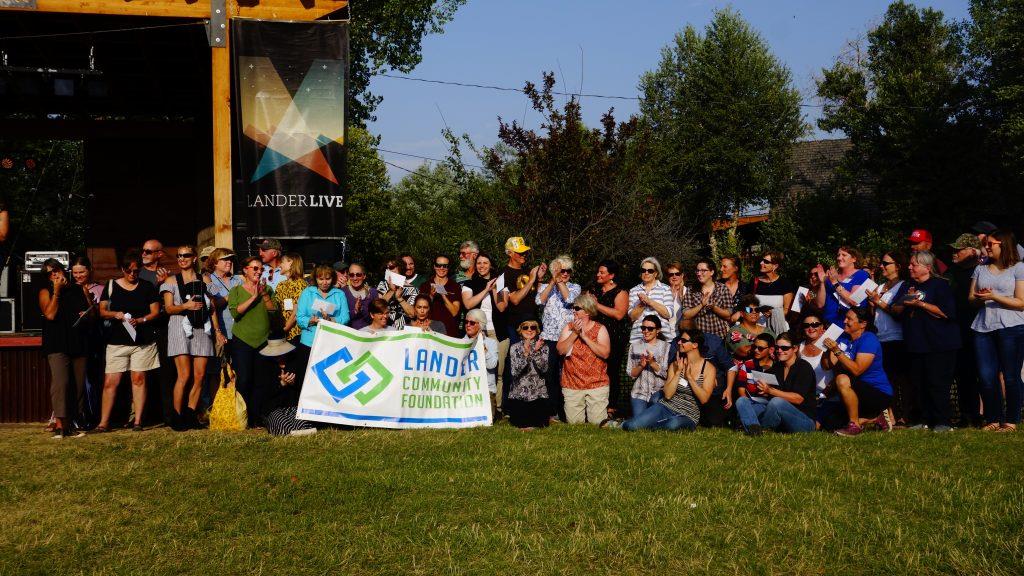 Now, Lander hosts an International Climbers’ Festival every year. There is a massively popular Brewfest, and a growing mountain biking festival. The Lander Economic Development Association (LEDA) was started to help “spur economic development in the Lander area.” Younger people are settling in and opening businesses to help them stay in the town they love. Wind River Climbing Guides, Sugared Craft Cakes, Wind River Shuttle, Wild Iris Mountain Sports, the Lander Fly Shop, among many others, are all local Lander businesses started by people who were initially just tourists. Now that’s a long-term investment. 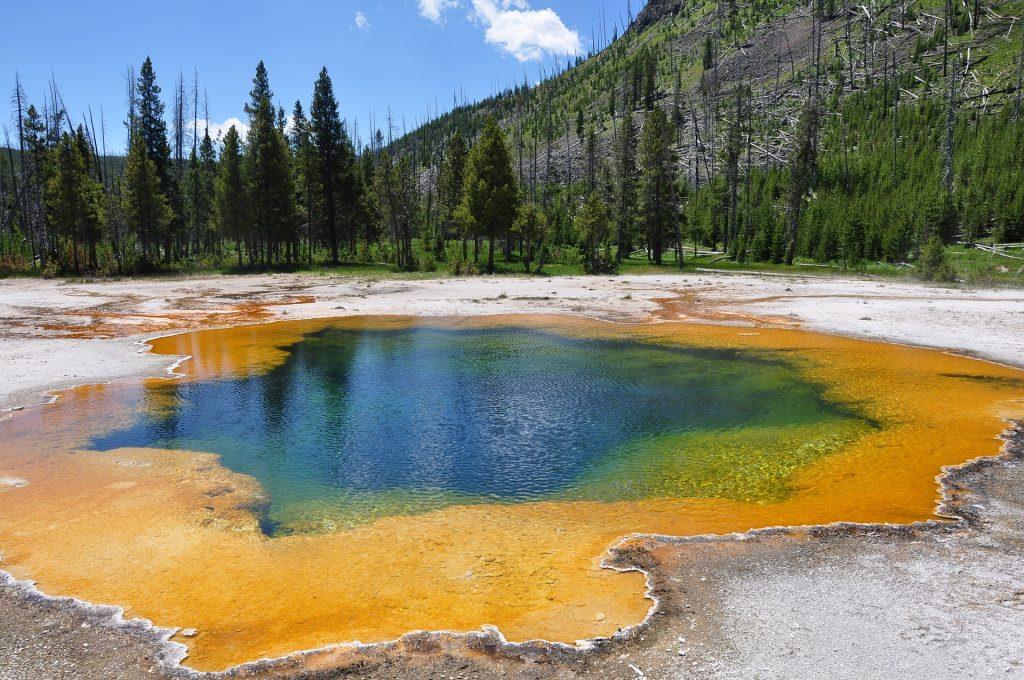 According to the National Park Spending Effects interactive tool, 7.5 million people visited Wyoming’s parks in 2017 and spent an estimated $882 million in gateway regions during their trips. Those tourist dollars supported 12,300 jobs and created $1.1 billion in economic output.

These numbers are no joke. Lander is about a three hour drive from Yellowstone, and the economic impact from the town’s proximity to the park is very real. Artists in Jackson Hole, and even Lander, feel the dollars spent by tourists. Hotels and restaurants feel it, and yes, tourism services like horse packing tours, dude ranches, and climbing guides feel it. 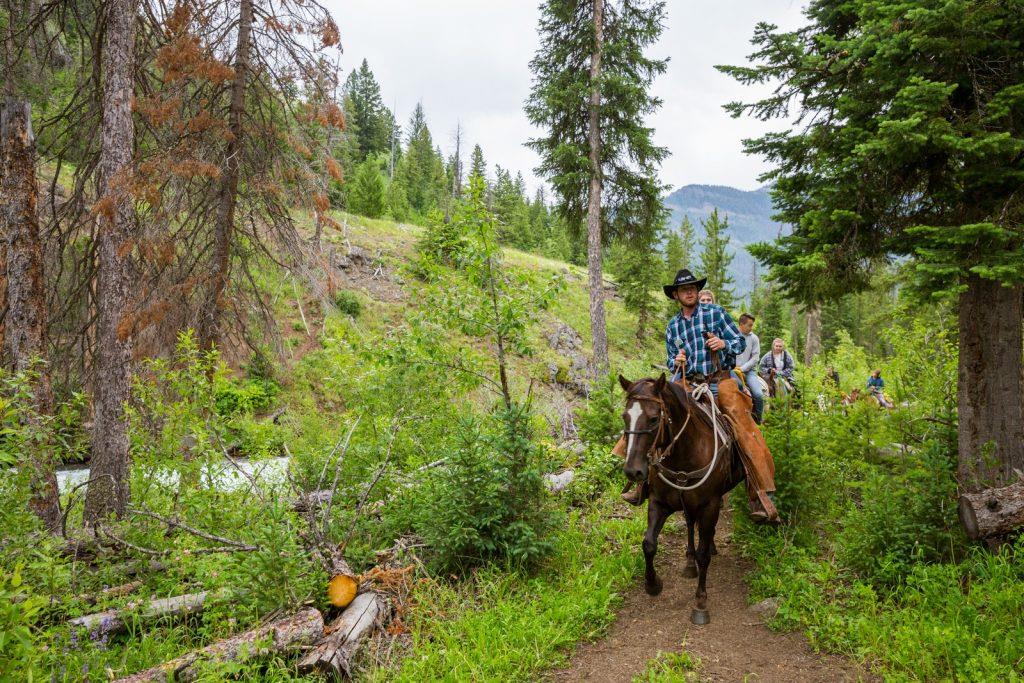 A guided horse back riding service benefits from the traffic driven by its proximity to Yellowstone National Park.

Unfortunately, a massive boom in tourism comes with a downside. Most people who live in a tourism-driven small town have probably noticed these cons more so than the pros. A 2016 article from National Geographic highlights the reality of visiting Yellowstone National Park: “wilderness contained, nature under management, wild animals obliged to abide by human rules.” In Yellowstone alone there was a $630 million maintenance backlog at the park as of 2017. Items thrown into geysers threaten their sensitive geothermal environment. Tourists gored by bison or elk have become an annual occurrence. The spaces designated to protect these wild places and creatures are having to cater more to their visitors than their residents.

The Need for Responsible Tourism During National Travel and Tourism Week 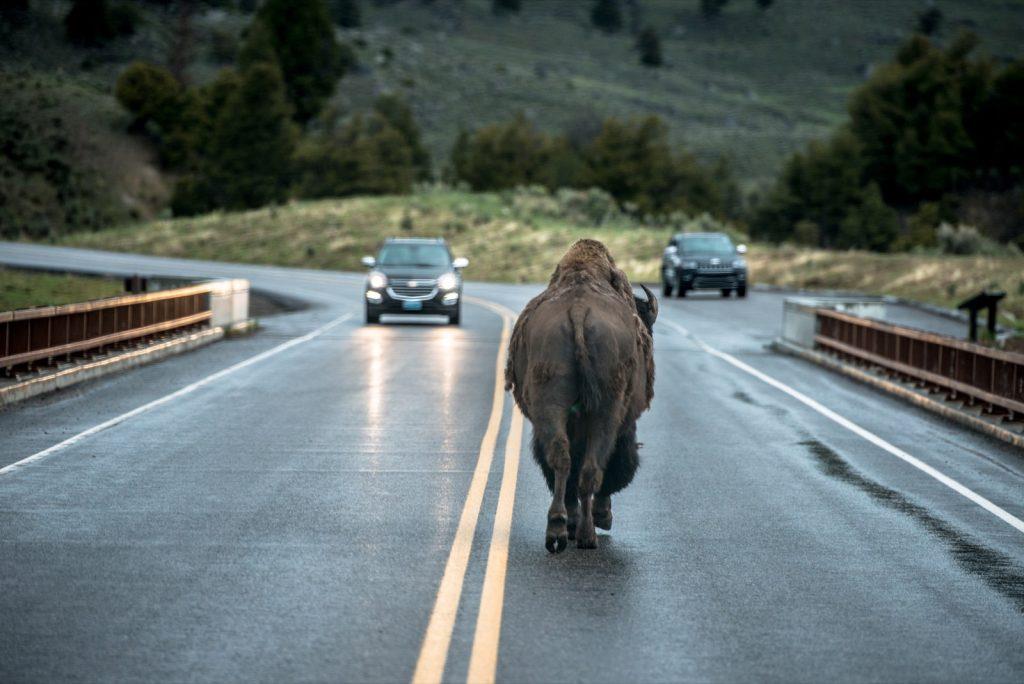 Traffic, crowds, and even human waste are plaguing our national treasures and causing shut downs left and right. People who see a cute Instagram shot of a girl in a field may not know that she trampled hundreds of wildflowers for those 40,000 likes. Places like Horseshoe Bend have gone from a local secret to a social media sensation seemingly overnight. Horseshoe Bend has even had multiple tourist deaths due to selfies gone awry.

All of this begs an important question: how can we responsibly promote travel and tourism? How can we use tourism to increase town, state, and national revenue without trashing our beautiful places? The shortest possible answer is by promoting responsible tourism. In Jackson Hole and Yellowstone specifically, responsible tourism comes in the form of limiting geotagging. This “Stay Wild” initiative encourages people to keep their locational tagging intentionally vague in an attempt to thwart those flower-tromping Instagrammers. 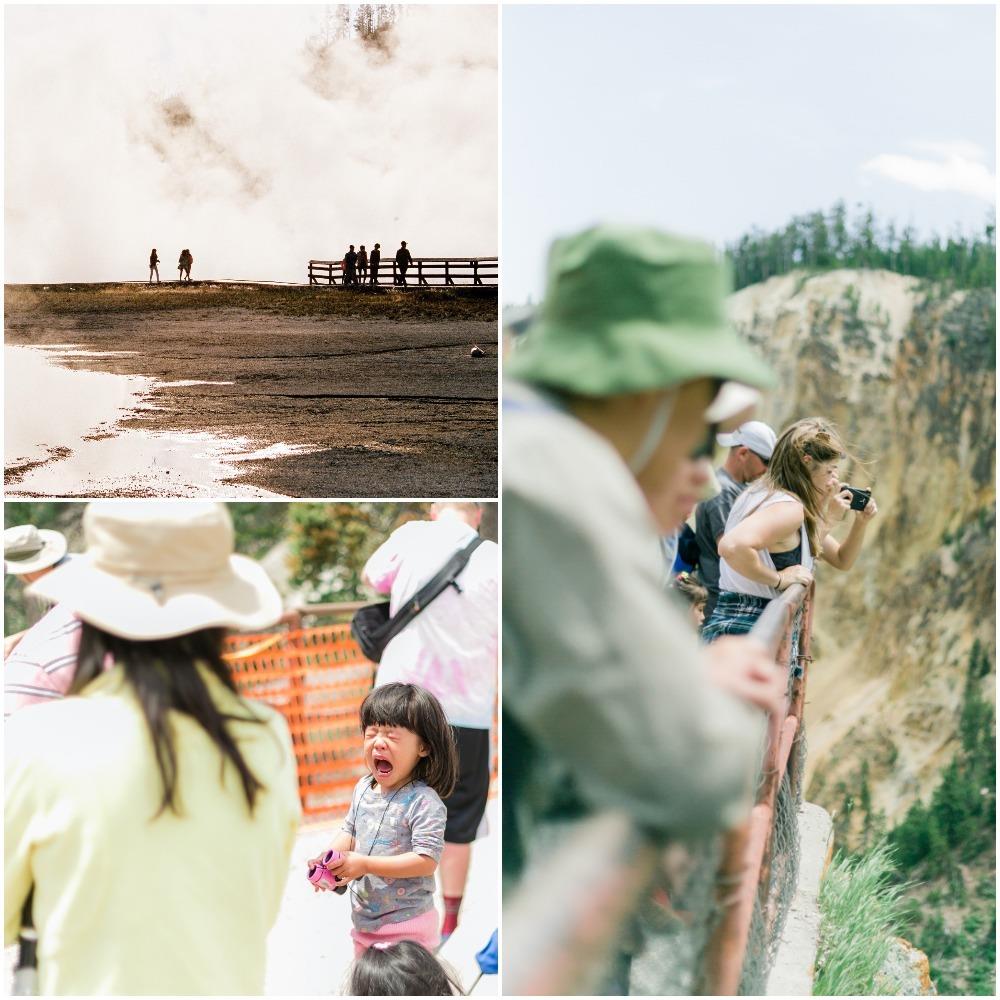 Crowds at Yellowstone have had a significant impact on both human visitors’ experience and wild animals’ lives. Photos by Jenny Smith and Miles Farnsworth.

Yellowstone is thinking about an online reservation system to limit the number of tourists. Devil’s Tower negotiated with Native American tribes to designate the month of June for a voluntary closure to climbing. This closure gives the tribes an opportunity to celebrate culturally significant celebrations at a sacred site—without the interference of climbers.

These sorts of creative strategic initiatives are critical to the future well-being of not only our wild spaces, but the towns, jobs, and local economies they support. Travel as a growth factor is a beautiful and mostly positive force, but to continue promoting tourism without taking a real look at the consequences is simply irresponsible. Rather, it should be an industry standard to promote responsible travel etiquette and techniques. The open discussion of environmental impact, rather than an effort to brush it under the rug, is another piece of the puzzle. Otherwise, we’ll all be looking toward the horizon while the polar ice caps melt and bison gore iPhone wielding tourists.

Another important factor is keeping relationships between user groups like climbers, hikers, and bikers, and land management services like the BLM and Forest Service in good standing. Organizing clean ups and trail days, having barbecues, and even co-funding initiatives can help keep an open door of communication between the people who use the land and the people who manage it. In Lander specifically, the WyoClimbers alliance is partnering with the local Forest Service to have a pit toilet installed in an area that sees lots of traffic—and consequently lots of bathroom breaks. These sorts of efforts are critical to protecting our wild spaces. Remember, teamwork makes the dream work.

The benefits and issues of travel and tourism aren’t unique to the United States. Plenty of areas around the world have seen how marketing their towns as destinations, and controlling that marketing, can create economic stability for their citizens. One tiny Greek island off the coast of Turkey has seen this in one really wild way. The island of Kalymnos went from being completely unknown and on the brink of economic breakdown to international climbing destination in only a few years. 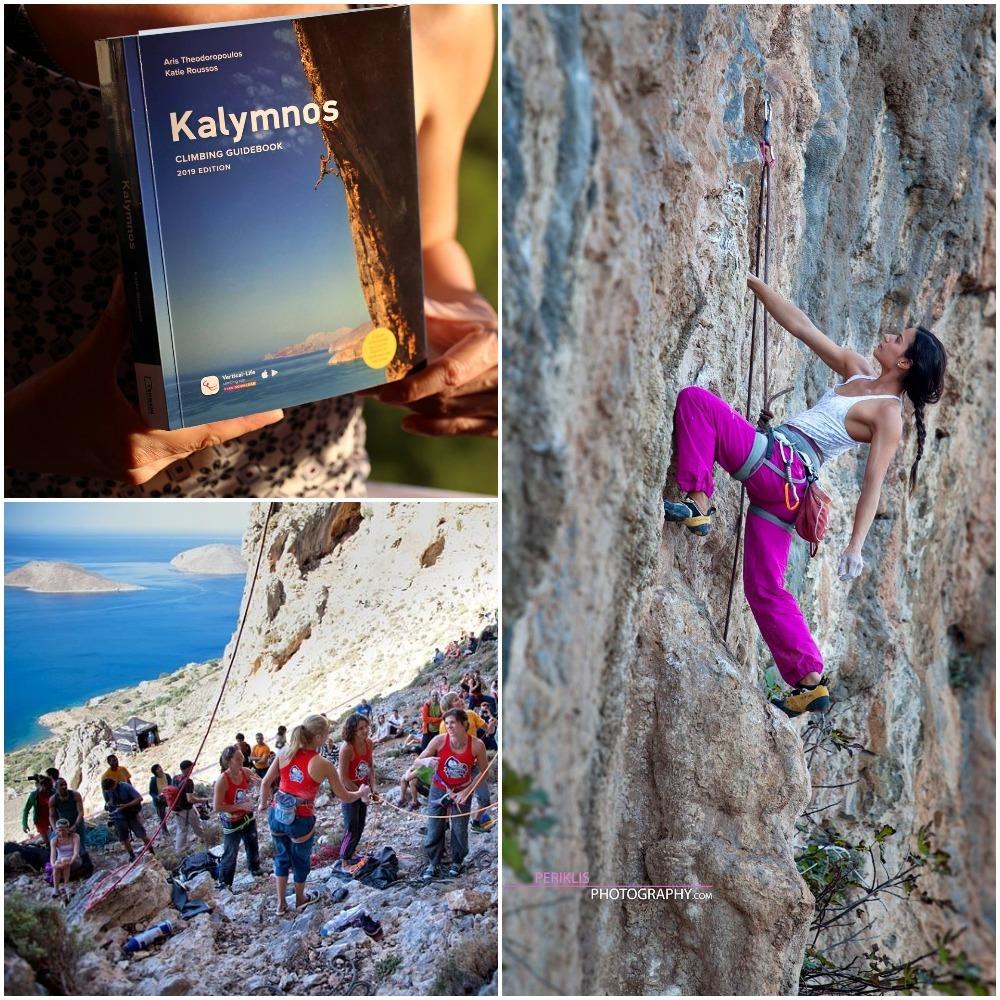 Since the early 2000s, Kalymnos has completely changed its economic structure. Between guidebooks, climbing camps, and festivals, it’s hard to imagine the island before the presence of climbers. Photos by Periklis Ripis.

For many years, the island of Kalymnos was famous for its trade in sea sponges. Due to environmental impact, and the general rural flight to cities after World War II, Kalymnos’s economic trade was not doing well. In the mid 1990s, climbers noticed the particularly enticing cliffs that capped the island and started a bolting frenzy. After the involvement of a few journalists from publications like Alp magazine, the tourists started rolling in. The economic force of the island changed dramatically in only a few years. Now, climbers from around the world are a frequent presence, bringing their vacation dollars to the small restaurants, bars, and bakeries that call the island home. The island even hosts an international climbing festival every year.

According to an article by Mountain Spirit Guides, “It is clear that the climbers have become a very important part of the tourism on Kalymnos, increasing the season from two months to almost year-round. The locals have been quick and cleverly adapted their business to this new form of tourism. They have help to develop the crags by lodging experienced route builders and even sponsored them with bolts. This positive reaction have made it possible for the locals to stay in charge of the development and profit from the ‘new wave.'” Rather than fight the wave, they chose to ride it. By partnering with route developers rather than fighting them, everyone has benefited.

Seeing the widespread impact of tourism in small towns, national parks, and international destinations sends a pretty convincing message: tourism creates resiliency. Our role here at Visit USA Parks as travel marketers is to both promote these areas and protect them, and we hope others in the industry feel the same way. We invite our readers to value these travel practices as well. We need to help towns, parks, and other destinations realize their potential while advocating for the protection of natural areas and responsible tourism. Promoting Leave No Trace Principles, supporting responsible tourism, and encouraging environmentally-friendly initiatives will all be critical components of tourism’s future. We only have one planet, let’s take care of it. Happy National Travel and Tourism Week!

How does your community handle travel and tourism? Tell us below! 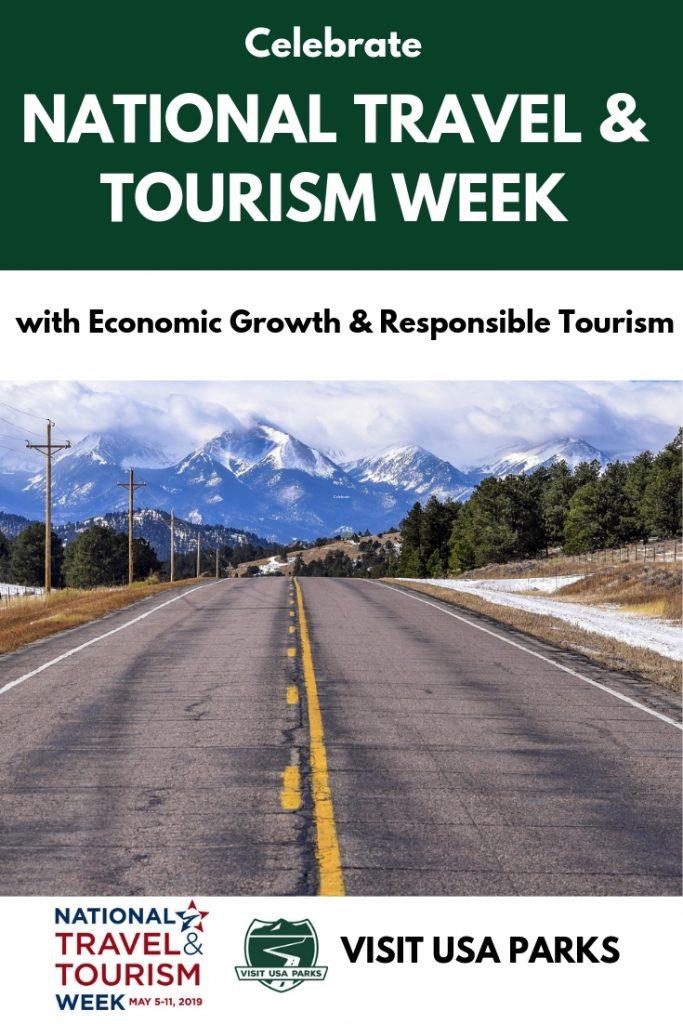